We have launched our crowdfund on Kickstarter, please head over and help us get the film finished
KICKSTARTER PAGE
LIVE

What is The Fence?

What actually is The Fence? 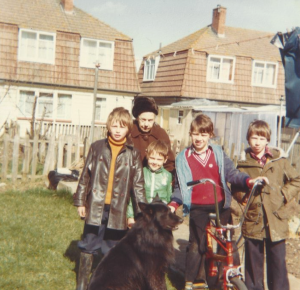 It’s a short film about a boy who get’s his motorcycle stolen the day he buys it. That’s as simple as it gets really. I got the idea from my Dad. He grew up on the Hartcliffe estate in Bristol. Which is one of the most notorious and impoverished estates in the South west of England. The main secondary school there was the biggest in the country at the time, with around 3000 students. He described it as a zoo, with fights everyday, sometimes eight or nine fights a-day. Can you imagine? He had plenty of stories of his childhood about school, fighting, stealing and all kinds of stuff. The bike story was just one of many really. But it’s one that stuck with me for a while and I eventually thought it was perfect for a short film project.

(My Dad is the far right kid in the picture.)

I probably heard about the bike story when I was around 15 or 16 and at that time I had absolutely no intention of being a filmmaker. The first time I thought about filming it was in 2014 for an art project I was doing in College. Thankfully I wasn’t mad enough to try it then as I had almost no experience in filmmaking. But I had discovered filmmaking on that one-year art course, and it had a real effect on me. I had always been into Art and Design and Photography. I also had a thing for animation, but I’m not sure I have the patience for it. Film was the first thing I felt like I could probably do forever.

I wouldn’t make the short film for another three years, in 2017. And It wouldn’t be released until 2018. So these things take time, is basically what I’m trying to say. They happen when it’s the right time I guess. I had to spend three years at film school to find the confidence and importantly the crew to make something like that. What could I have produced in 2014? I had no understanding of anything. How to write a script, how to shoot, how to edit, colour grading… “what’s that?” It would have been a disaster, but luckily it didn’t pan-out that way

This is when the film was actually shot. It took seven days to film around Salisbury as that was where I lived during University. It would have been nice to actually use Bristol, but impossible. I’d had a sneaky feeling since my first day on the course that I’d use my Dad’s story for my final project. I believe the first draft of the scrip is dated January 2016. So I was writing it way ahead of time. Which was a smart move (if I do say so myself). It surprised me that my peers didn’t think the same. That they were just going to ‘decide’ when it was part of the criteria to decided. Everybody knew the final year project was a film, so why weren’t they getting on it? By the time you pick your idea in December, there’s the real possibility that you’l draw first out (first group to film) in January, by which time, you’re screwed. And that wasn’t going to be me.

My teachers didn’t really get it. I don’t think any of them thought it was that good an idea, and too boot they all thought it was way too long and far too difficult to manage. Multiple actors, multiple locations, motorbikes, cars, fights and all to be done in a convincing 80’s setting. Nobody had tried anything like it in 30 years of the course. To quote my course leader, “I think you would be mad to attempt this.”

At the time, it really was the hardest thing I’d ever done and it’s still very much ‘up there’. Organising something like that singlehandedly is brutal. Often horrible. It’s always fun in hindsight but I have to say I struggled to enjoy the process. It’s the end goal that I always have in mind and I’d struggle to tell you much about the shoot from memory, I certainly don’t recall having a great deal of fun. This is only because everything is on you. Everything was my problem to solve. Which isn’t how a proper film shoot is run of course. But when it’s this level, you’re the producer, the location manager, the catering, the art department, public relations, logistics manager, director and on this occasion the supporting actor. It’s hard to have fun when you’re juggling all that. With that said, it was an amazing thing to do. And I can’t quite believe I pulled it off sometimes. It achieved the highest grade ever awarded, 85/100. Which I still think stands today. I’m a very competitive person, I used to play a lot of sports and I think being competitive is important. It adds a great deal to my drive and without it I don’t think I’d function as well. It’s difficult to find competitive angles in film and art, because ultimately it’s all subjective. But there are awards to be won… so it may as well be you. 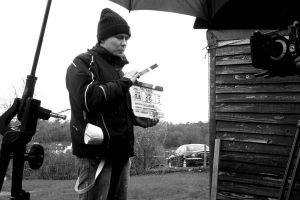 You’ll always be very surprised when you make a film. Because ‘stuff’ is going to happen and ‘things’ are going to go wrong. Or they’re definitely not going to go the way you think they are. This is what is exciting and terrifying about the job. Just as an example, the house at the end of the film (Charlie Born’s home) was the only house in the whole of Wiltshire I wanted to use. However it appeared like nobody lived there. So I left a letter on the door and hoped for the best. This resulted in a carer finding it and passing it onto the son of the elderly woman who lived there alone.

Little did I know she was in the very late stages of dementia. Now what do you do? Thankfully her son was fine with us filming and he offered to be around on the day. However, on the day, he couldn’t be around, but said it was still fine to film… right… this is going to be interesting. Can you see why this is stressful? When I spoke to the woman on the day, she was very sweet and really didn’t seem to mind, but of course I was on edge the whole time. Any moment she could forget who this gang of strangers are in her hallway and freak. When we wrapped, I went inside to say my goodbyes and thankyous. She asked me how I knew her son, if we were school friends? Bearing in mind there’s about 30 years between us… that’s not an easy experience. I do hope she’s okay bless her. But that’s something you can’t plan for, and they happen all the time.

After a very underwhelming festival run, not getting into any Bristol festivals, I decided to put the film on Youtube. Now I wanted it to do well of course, I said if it got 10,000 views I’d be happy with that. I think it deserved it. It crept through the first thousand very slowly and was around the five thousand mark after about three weeks if I remember correctly. Then, over-night it bounced to 11,000. Which was fun. It then quickly got pulled down by Youtube for the unlawful use of a song.

Can you imagine how it feels when someone calls and says “I can’t see your film mate, the screen’s just black.” Panic mode! In all fairness, I was surprised it was just the one song. I resolved it in a day or two by calling the record label and saying “When was the last time that song got 6,000 plays in a night?” They were actually really cool about it. But I was worried that the day or so of it being down would have stunted its momentum. So I watched it quite closely, and then it just started going crazy. I think it got over 50,000 views in a day and it reached 1M in five months. Which is 200,000 a month. It’s currently at 3.8M as I write this.

People always ask me how? And I always have to disappoint them with “I don’t know” because I don’t know how it happened. I shared it around a lot, I posted it anywhere I could, even in comment sections about the 2018 world cup (because Jordan Pickford looks a bit like the kid in This is England). Literally anywhere there was ‘traffic’. But ultimately Youtube’s algorithm picked it up and ran with it. I’d also like to think it’s a good film which people really enjoy and relate to. So if i’m feeling a bit ‘short’ with people that day, I’ll just say “Because it’s good?”.

People also ask me “Have you had any offers… people must want you?” and the truth is I’ve heard nothing from the film industry at all. Not a single email regarding The Fence, ever. Which is funny isn’t it? It’s because there’s a canyon sized gap between online media and the film and television industry. They don’t care in the slightest who’s made what online. It’s nothing to do with them. The industry is like a bubble, it has its own micro climate and it’s surprisingly small. It’s quite difficult to puncture this bubble, and I’ve learnt that I’m not going to do so with my short films or however many million views I have. Everything is big money, and nobody is mad enough these days to take a risk on some kid with some short films. Even if they are good, it’s never going to be enough.

What The Fence has most recently come to represent for me is a chance. Did you know that over 98% of first time directors don’t make a second feature film. And that 98% of first time features make no money. Scary facts. So if you want to be in that top 2% you better have a damn good idea about what you’re going to make. Because there’s the very real possibility that you’ll never get another shot.

Personally I always considered The Fence too difficult as a first time feature. Just look at it, it’s a bit massive. Most first time features are a small cast, one or two locations, usually a horror. Which The Fence is absolutely not. It’s a lot of characters, running around multiple estates and it’s all set in the 80’s. Not a task to be taken lightly. So I had given up on it as a my debut and I was working on another idea. However, many a-trusted opinion have repeatedly told me “You should do this Fence thing Will, seriously you have to do it.” And what can I say… they’re right. But how do you do it for less than half a million? Correction, how do you do it ‘well’ for less than half a million? Now all the fun and games begin.

So to conclude, by the time I finish The Fence, I’ll be 27 (at best! I’m 25 currently), It would have been more than four years since I made the short film, and nine years since I decided I wanted to be a filmmaker. Remember when I said things don’t just happen? I must be really into it in order to carry the enthusiasm for th long. That’s what I keep telling myself anyway. I’m also slightly nuts.

Thank you for reading, I hope it’s shined some light on myself and the film.

Thanks for sharing your story and inspiration. It is really inspiring and I’m sure you will go far. Keep going and you will get there!