Who’s the best in this class?

It’s important to pair up with people who are better than you. Filmmaking is very team orientated and you’ll really struggle to go it alone. You need to work with talented people who you can rely on because it’s all down to trust. “Is this person going to deliver the goods on time?” Is the question you ask. And the answer needs to be yes.

Unfortunately reliability isn’t in abundance… it’s quite a rare attribute, but this can help make spotting the ‘good guys’ quite easy. And one of my good guys, in fact he’s my main good guy, is Mr Adam Pickford. And this blog is all about how I managed to trap him and ruin most of his twenties.

Adam was the best cinematographer in the class (in my opinion) and I really wanted my stuff to look good. As I mentioned in a previous post I hadn’t really been into filmmaking all that long so in a lot of ways I felt pretty lost and at sea with the whole procedure. What some people fail to notice is that Adam is a filmmaker first and cinematographer second. The guy could, if he wanted to, write, direct, light, cut and finish a whole film to a better quality than some teams probably could. And I really wanted him on my side. Funnily enough however, we actually barely spoke during the first year of film school as the class was split into two, and we landed on either side of that split.

Adding to that I’d openly admit that we’re quite different people, and in usual circumstances (whatever they are) we’d most likely never cross paths. It’s funny now because he’s one of my closest friends, but at the time my thinking was ‘I need that guy’ which I suppose sounds kind of shallow, but at the same time people get jobs because of their skills and experience, rarely because they’re friendly. And that’s what it was at first, a job I needed filling.

The Prequels are great!

Fortunately there was a mutual trade-off on the cards. I had ideas and the drive to actually make things materialise (which is a thing). And Adam wanted the opportunity to rack up as much footage as he could. So we had a deal.

However, it wasn’t long before things started to click quite satisfyingly. As I said I think our personalities were pretty far-afield but it seemed our tastes were surprisingly similar. We seemed to like the same films, music, actors, directors, colours, compositions and even all the way down to tiny details like a sound effect or the timing of a minor cut. We both enjoyed the Star Wars prequels and could often joke about them and argue their qualities against people who didn’t, thus the title of this section. The only thing we tend to differ on is our sense of humour. For sure there are plenty of things we both find funny, but the outer regions of those senses lean in different directions.

We kept working together (often outside of class) and eventually racked up a good number of micro shorts and sketches; which will never see the light of day! But were a great start to our partnership. We soon looked towards the graduate films at the end of the third year. By now we were spending more time together outside of filmmaking, we were now ‘buddies’. 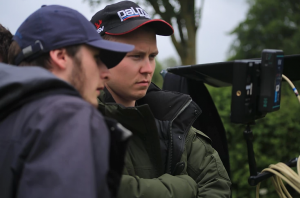 The graduate films are independently produced projects that every student has to undertake on their own. It was over mine and Adam’s films that we really came together to help each other achieve the best we could. Much like my crazy 80’s bike film, Adam also had mad ambitions of recreating World War II. So both our films were mammoth tasks and I’m pretty sure none of our teachers thought we had a chance at delivering anything convincing. Because no-one had tried these types of projects previously. Both our shoots were scheduled for March, about two weeks apart, with mine first. It was tough because we both had to work on our films separately in-order to get everything ready for them. But we did manage to help out as best we could. Adam would come with me to the locations and help me plan the shots, as well as research the films and ‘looks’ that I liked. Then I would accompany Adam on location scouts down the the coast and help him with the writing side of things, as he’ll admit isn’t his strong suit.

I think I did a pretty decent job of producing my film, but without doubt if it weren’t for Adam it probably wouldn’t have been good enough (cinematically) for anyone to care. I’m not sure I can say the same about Radio Londres as my role in that film felt much more supportive than necessarily contributing to the overall finish. But that’s just the nature of our talents. I’m a good hype man and I’d like to think I’m reliable, resourceful, I can drive and if I had to carry Adam on my shoulders to get his film over the line I would have. Whereas I was unsure about how to actually film The Fence to some extent, Adam had a very clear idea about what he was doing and I didn’t want to get in the way of that, or slow him down. So I just tried my best to help him write it and then to do as much lifting and running around on location to help keep the weight off him. Adam’s a better filmmaker than me, so what improvements could I bring to his film? That’s my take on it anyway… in retrospect.

Both of our films received the highest grades in the class (and ever given on the course). Two first degrees in the bag (even though they aren’t worth a penny in the film industry). making three years of our lives seem all the more worth it. I’ll share a funny little story/secret with you. During our graduation ceremony which took place in the EPIC Salisbury cathedral on a pretty gloriously sunny day, there was a moment after the main certificate awards where our head of year stepped onto the podium to declare the honorary student of the year (or something like that, best in class basically).

Now, as mentioned I’m very competitive. So yes I would have really wanted this, but I did initially think Adam would take it, because he is the better filmmaker all round. However during his speech, our head said something along the lines of “they put together a great narrative” and the obsessive competitor in me suspected for a moment that “Oh hang on! Perhaps the tides have changed here, I might actually have it.” So yes I moved to the edge of my seat, I tried not to look around too much as I gathered most of the class would know who this was between and then… I lost. Hilarious. Have you seen the scene in Zoo Lander where he goes up for the award even though he’s lost it? That is as close to how I felt as I could describe. 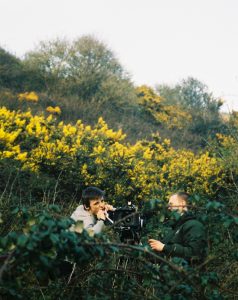 So Adam had defeated me, and it felt right, that was the logical and fitting conclusion to his filmmaking story up to that point. It’s the only loss I’ve taken well…ish. Not too long before that, we had filmed The Manor, which was our 35mm end of third year project, and that is what this section is about; the easiest most dreamy project we’ve had to date.

Our film school has a hidden gem in the basement. A Panaflex GII Super 35mm camera. This a rare item that most wannabe filmmakers can only dream of getting their hands on. At the end of the third year, if students have demonstrated a desire to do well then they are offered the chance to make a short film with it. There’s no grades involved, it’s purely optional. Very surprisingly, the majority of our year basically did a runner and left town as soon as they were no longer obliged to live there. Meaning that it was practically only me and Adam left to do it. As our lecturer put it “The likes of Lucas and Scorcese would have crawled across broken glass for an opportunity like this in their youth.” But it would seem all of the ‘filmmakers’ in our year had better things to do.
Even with a great camera though you still have to produce a good film in very little time with very little money. So what did we have at our disposal? A bunch of World War II uniforms, a replica Kar98 and an M1 Grand (left over from Adam’s film. I guess we’re doing a War film then! To be honest, this was a perfect match for the project, as all the great war epics were captured on cameras similar to the GII. Earlier I mentioned me and Adam share shockingly similar tastes, and without much debate our favourite war film is Saving Private Ryan. I enjoy war films but Adam is a total nut for them! So the idea of shooting a 35mm WWII action flick, with a decent sized crew was literally a dream come true for him. And it was fun to watch, he was like a kid in a toy shop.
Speaking of a decent crew, it was the first time we’d experienced a team of more than twenty odd people. Remember that most of the third years (who this project is usually strictly for) had left, so with the exception of two others, it was me and Adam and a gang of second year students. Without trying to sound overly egotistical I think this actually helped the project, because I’d like to think that the second years perhaps looked up to us a little, or at least respected that we had just gone through the third year and done a damn good job of it. I think this just made the flow of things and the chain of command run smoother than it may have done if we’d been working with some of our third year peers. I could be wrong of course… We’ll never know.
Basically we had total control of everything and like a well oiled machine the shoot ran almost perfectly without any major delays or issues. I almost struggle to recall the days but I know we were just slicing through them like a hot knife through butter and it was a great ride. After the carnage of our graduation films this was a dream. And I’d say with confidence that it cemented me and Adam as a legitimate duo. I have very fond memories of that time and as the sun would set on those mid June nights it was a perfect ending to my University experience. Three proud pieces of work between two guys who couldn’t be more different from one another, heading off into the next chapter. I had found my collaborator and a good friend. 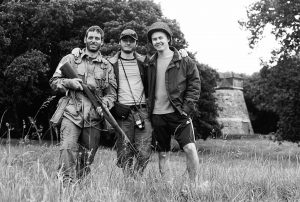 Look out for Part Two of this blog! Where I’ll talk about how we dealt with filmmaking after University and the lead up to The Fence feature film.

Thank you ever so kindly for reading. Till next time.